Is is amazing that so many historic events have happened in “the hunting world” during the 13 years since that book was published:

The Soviet Union collapsed, and once forbidden areas all across the world’s largest country were opened to hunting.
President Ceausescu and his wife were put before a firing squad, and Romania was opened to hunting.
The Sleeping Giant, China, with its many rare and interesting species, was opened to hunting.
Elephant hunting was opened in Botswana.
The war in Mozambique ended, and hunting opened and is looking better each year.
The poaching of elephants in the fantastic Selous Reserve of Tanzania was stopped, and the elephant numbers are growing rapidly.
Beautiful Ethiopia closed hunting and then reopened.
Iran, after years of turbulence, once again accepts hunters from outside.
As a client hunter, pioneer hunter, and professional hunter, Bert Klineburger is without a doubt, the world’s preeminent International Hunter. In “White Hunter,” Brian Herne states that Bert Klineburger “has hunted in more countries worldwide than any hunter in history”. More importantly, Bert and brothers Chris and Gene opened more countries to post World War II tourist hunting than any other individuals, by far.

From tough times growing up in a poor mining town in Arizona, to head of the world’s largest taxidermy company; from hunting Alaska with the pre-statehood pioneers to operating safari companies while living in Uganda before Idi Amin, the C.A.R. before the elephant poaching, and Zaire before losing it all except his life; from opening Afghanistan for Marco Polo sheep and taking hunters through the Wakhan Corridor to the Roof of the World, and then being in the middle of it all as communism fell, dictators were shot, independent countries were formed, and hunting throughout Eastern Europe and Asia was opened, you will be immersed in reading the fantastic life that Bert Klineburger continues to live as the preeminent International Hunter of The Greatest Hunting Era.

Trade Edition available for only $39.95! 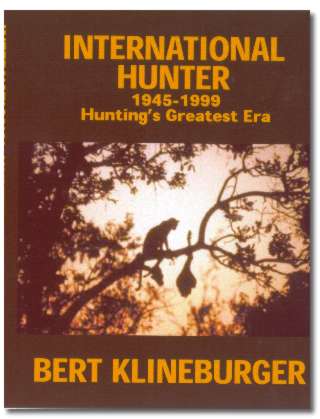