**Available for immediate download on Kindle for $9.99 by typing in “Sport Hunting on Six Continents” on a Kindle**

Martin and Osa Johnson were the first to bring back black and white film of the natives and wildlife of the South Seas, Borneo, and Africa in the early 1900s. Wally Taber was the first to bring back color film of his African safaris in the mid-1900s. And KEN WILSON was the first to bring back videotape of his worldwide hunting expeditions in the late 1900s. SPORT HUNTING ON SIX CONTINENTS chronicles 15 years of WILSON’S adventures on behalf of Sportsmen on Film. From the snow-covered mountains of Alaska to the tropical paperbark forests of Australia, from hunting with the native American Inuits and Indians of North America to the Gauchos of South America, the Aborigines of the South Pacific, the Bushmen and Pygmies of Africa, and modern-day Asians and Europeans, WILSON has been there with his video camera, rifle, and many of the world’s finest professional hunters. Along the way, his 11-year friendship with Peter Hathaway Capstick, the best-selling hunting author in the world, resulted in several safaris together and six videos prior to Capstick’s death in 1996.

Trade Edition available for only $39.95

**Available for immediate download on Kindle for $9.99 by typing in “Sport Hunting on Six Continents” on a Kindle** 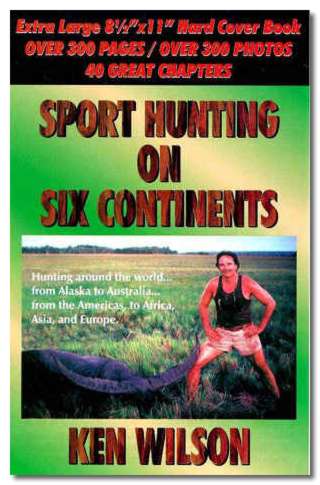 You're viewing: Sport Hunting on Six Continents $39.95
Add to cart